My Son is a Third Culture Kid

Since my son was born in 2017, our family has lived in three countries, on three different continents. He’s being raised as a Third Culture Kid (TCK).

What is a Third Culture Kid?

I first came across the term “Third Culture Kid” while searching for information about global parenting. We spent two years living in Japan for a teaching job I had, and there were many international families among my colleagues and neighbors. Then we made a move to Germany for my partner’s career, and again we met many families from a variety of countries.

Due to COVID restrictions and not being able to meet in person freely, I wanted to connect online with other parents in similar international situations, and I came across a Facebook group called Third Culture Kids Worldwide.

Within the group, people post about their lives, the challenges they face as Adult Third Culture Kids (ATCKs), and resources they’ve found interesting or useful. They also seek connections with other TCKs who have lived in the same areas of the world.

Since my interest in TCKs relates to my experience parenting one, I asked members of the group about resources for parents of TCKs. They offered some suggestions that helped me dig into this whole TCK thing a bit more.

Ok, but what is a Third Culture Kid?

Before we get to TCK resources, let’s take a look at what it means to be a TCK. According to Wikipedia, “Third culture kids or third culture individuals are people who were raised in a culture other than their parents’ or the culture of their country of nationality, and also live in a different environment during a significant part of their child development years.”

TCKs have been the basis of research since the 1950s when John and Ruth Useem coined the term Third Culture Kids to describe American children living abroad with parents working primarily in missionary, military, diplomatic, and business contexts.

The lifestyle of a traditional TCK most likely includes cross-cultural elements, high mobility (moving multiple times during childhood), expected repatriation into the passport country, and an identity built upon experience and participation in a specific system (military, corporate, missionary, etc.) rather than a specific location.

What is the “third culture” exactly?

Essentially, shared experiences, challenges, and impacts of an international lifestyle build the Third Culture. This differs from people brought up in monocultural contexts because the culture isn’t dependent upon geography or a shared history as it exists in more stationary groups of people. The Third Culture is experiential.

The traditional TCK definition can be represented by the diagram below: 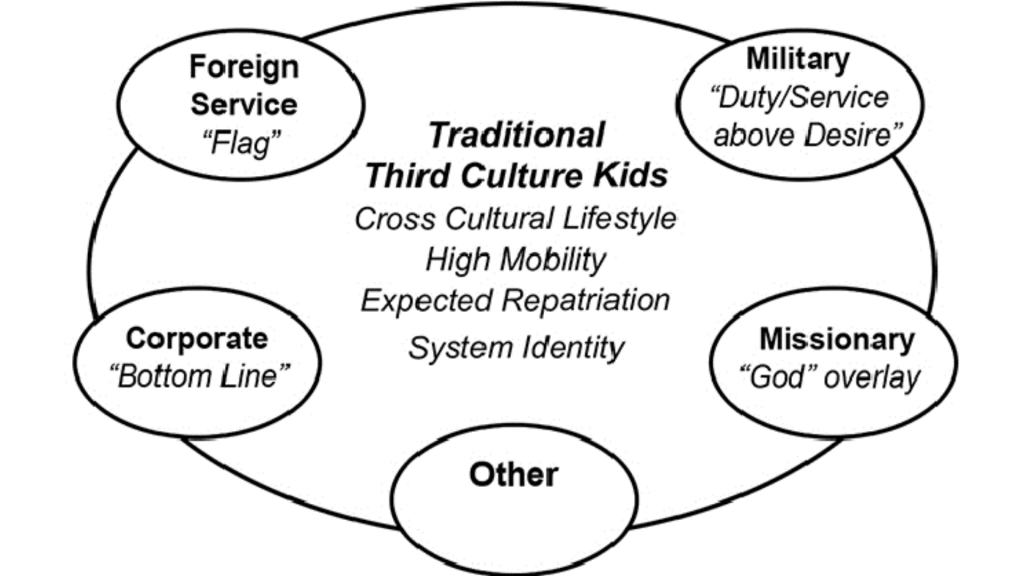 More recently, Ruth Van Reken and David Pollock expanded the definition to include other groups of people who may not be as privileged as the groups included in Useem’s definition.

“A traditional Third Culture Kid (TCK) is a person who spends a significant part of his or her first eighteen years of life accompanying parents into a country that is different from at least one parent’s passport country(ies) due to a parent’s choice of work or advanced training.”

This updated definition could be represented by the following diagram:

In this model, TCKs exist as one subset within a larger group of Cross Cultural Kids (CCKs). This group includes a much broader spectrum of experiences and identities than the smaller TCK model alone. According to Pollock, Van Reken, and Pollock,

“A Cross Cultural Kid is a person who has lived in-or meaningfully interacted with two or more cultural environments for a significant period of time during developmental years.”

It’s hard to put people and experiences into specific categories, so these definitions and models have changed over time. The basic elements of the TCK or CCK lifestyle, though, exist in the spaces between and among cultures, where aspects of culture intersect. Living at these intersections of culture creates unique opportunities and challenges for children.

What are the benefits & challenges of being a TCK or CCK?

Typical challenges faced by many TCKs and CCKs include:

As I already mentioned, there are pros and cons to any lifestyle, and the TCK lifestyle is no different. The challenge I face as a parent of a TCK revolves around setting my son up for the greatest amount of success while mitigating the challenges he may encounter in useful ways.

This is probably the challenge all parents face, right?

With raising a Third Culture Kid, an additional challenge is learning about how my son’s upbringing is going to likely impact his identity and perception of the world and himself as time passes. His experience will not be the same as my own, it isn’t already. But, that’s okay.

I’ve started collecting resources to help guide my family through our chosen lifestyle, and I hope sharing resources with other parents can provide an opportunity to promote the benefits while meaningfully mitigating the challenges of the TCK and CCK lifestyle.

This site uses Akismet to reduce spam. Learn how your comment data is processed.